Media Sales Recruiters invest two full days to access the candidates’ sales presentations, critique and hire the pre-qualified candidates selected for the program.  Each MSI candidate scenario is based on a …real-world media sales avail. Following the presentations, each media company has a private “meet and greet” room to spend quality time with each candidate. In addition to the private meet and greets, the media companies also have the opportunity to have lunch with the candidates.

The Media Sales Institute (MSI) would not be possible without the generous contribution of time and energy of media executives, in the industry today such as Ms. Abby Auerbach, Executive VP of the Television Advertising Bureau (TVB), and Mr. Jeff Schmidt, SVP/Professional Development of the Radio Advertising Bureau (RAB) to highlight a few. Thanks to each and every executive who give their time and energy.

Since, 2000, below is where many media sales careers have begun after graduating from a Media Sales Institute (MSI) 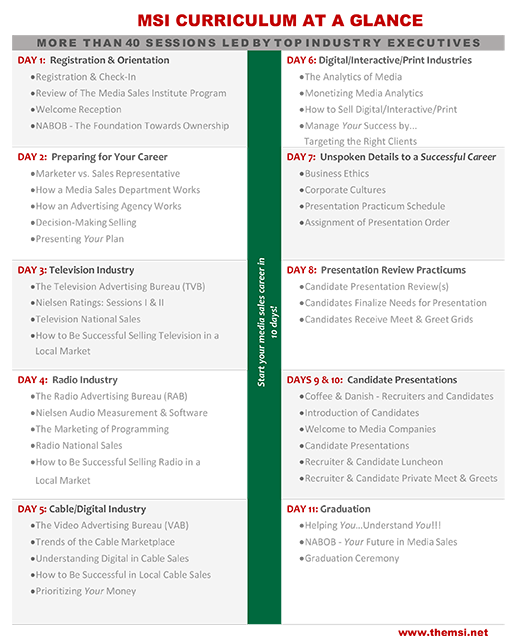